Shouldn’t I Know Myself by Now?

04 Aug Shouldn’t I Know Myself by Now?

Posted at 22:12h in Uncategorized by Dr. Jennifer Manlowe

“Know thyself” is the dictum that appeared on the front of the temple in Delphi. But what does that mean and why is it important? The two maxims that follow “know thyself” were “nothing to excess” and “certainty brings insanity”.

In 1600, in his play Hamlet, Shakespeare writes, “To thine own self be true.”

In 1750, Benjamin Franklin, in his Poor Richard’s Almanack, observed the great difficulty of knowing one’s self, “There are three Things extremely hard, Steel, a Diamond, and to know one’s self.”

In the most ancient Indian philosophical traditions, Knowing the Self is a core principle toward spiritual liberation or Moksha in Indian philosophical traditions, including Advaita Vedanta. In the Upanishads, it appears as “ātmā́naṃ viddhi”, which literally translates to “know thyself”. The idea is reflected through the four key statements known as Mahavakya, found in the four Vedas, which form the foundations of Vedanta philosophy.

In a famous Chinese (Taoist) text,  The Art of War, the maxim 知彼知己 means “know others and know thyself, and you will not be endangered by innumerable battles”. In this saying by Sun Tze (孙子, Sun Zi), the idea of knowing oneself is paramount.

In the tale of Siddartha, later named the Buddha (awakened one), he supposedly asked himself, “Does Self/Soul (Atman) exist?” He sat for days exploring possible answers to this question. He didn’t want to affirm the traditional Indian declaration that the Soul exists if it wasn’t experientially true for him. As the story goes,

Having listened to all the holiest men of his day in 6th century India, studying all the sacred texts, and trying all their methods to awaken he decided to find out for himself.

Now, there was nothing to rely on, no one to turn to, and nowhere to go. He sat solid and unmoving and determined as a mountain, until finally, after six days, his eye opened on the rising morning star, so it is said, and he realized that what he had been looking for had never been lost, neither to him nor to anyone else. Therefore there was nothing to attain, and no longer any struggle to attain it.

“Wonder of wonders,” he is reported to have said, “this very enlightenment is the nature of all beings, and yet they are unhappy for lack of it.” Until he awakened to the idea that there is no separate Self (or Soul) to be found, all that exists is interdependent, he was lost in doctrines. Instead, he decided Anatman “no self” was experientially accurate. So it was that Siddhartha Gautama woke up at the age of thirty-five, and became the Buddha, the Awakened One, known as Shakyamuni, the sage of the Shakyas.

He was known to encourage others to investigate the solidity of self for themselves.

In the Zen Buddhist tradition, there is a koan that asks, “Who was my face before I was born?” This practice is one that leads us to an infinite investigation to uncover for ourselves answers regarding our own existence in the realm of all our relationships–no separate self/face exists outside the vast web of relationships.

I often use an artichoke to illustrate No Self (no separate self exists). Each leaf on the artichoke is a role we play. We are someone’s parent, teacher, worker, offspring, sibling, boss, student, neighbor, etc. We did not come into this world alone nor do we know who we are as a single THING. We are not a thing. We are not separate or solid unto ourselves. Rather, we are the sum of the parts we play with an ever-opening heart at the root of all of us. 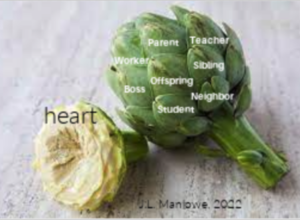 We are the sum of the parts we play