Do Smartphones Make Us Dumb?

04 May Do Smartphones Make Us Dumb?

Posted at 18:42h in Uncategorized by Dr. Jennifer Manlowe

The smartphone isn’t a perfect device, as we all know. It forces the world into a tiny screen. It runs out of battery, bandwidth, and power. It distracts us from the world around us. ~ John Battelle

We are the greatest computers in this world, but now we’ve created the smartphone which is smarter than us now, but we’re still making dumb decisions. We have given our creations more power than we have, and that to me is dumb. ~ Bootsy Collins

On average, smartphone users spend between two to four hours every day hunched over their phones, checking email, texting, or in their apps. That’s almost 1400 hours every year that people are putting their souls (not to mention our necks and spines) in a compromised position.

According to New York spine surgeon, Dr. Kenneth Hansraj, texting is like lifting weights but doing so unwittingly. He determined that, when you bend your head forward at 15 degrees, its weight effectively increases from 12 pounds to 27 pounds. At 45 degrees, your head exerts 49 pounds of force, and at 60 degrees, 60 pounds—this is like carrying an eight-year-old child around your neck for several hours a day!

Imagine carrying any child around your neck for several hours a day, EVERY DAY!

“The problem is really obvious in kids” explained my own chiropractor, “stress on their neck is leading to complaints of neck pain and headaches from smartphone users, some as young as nine years old.”

Why do we compulsively do what obviously hurts us?

Both teens and text-dependent adults are becoming even more restless, easily bored creatures and, for too many of us, our gadgets give us in abundance qualities our neurochemical systems find particularly exciting. Novelty is one, and the illusion of closeness is another.

The dopamine delivery system is activated by finding something unexpected or by the anticipation of something new. If the rewards come unpredictably — as text messages do—we get even more carried away. No wonder we called Blackberries, our earliest hand-held communication devices created in the late 1990s, “CrackBerries.”

The dopamine buzz arrives through neurochemical cues that a reward is coming. In order to have the maximum effect, the cues should be small, discrete, and specific — like the bell Russian physiologist Ivan Pavlov rang for his dogs. 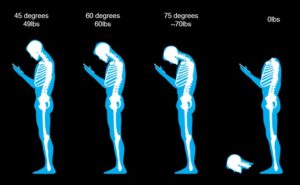 Text Neck can be treated…

Washington State University neuroscientist Jaak Panksepp says a way to drive animals into a frenzy is to give them only tiny bits of food: This simultaneously stimulating and unsatisfying tease sends the seeking system into hyperactivity.

University of Michigan professor of psychology Kent Berridge says the “ding” announcing the arrival of a text message serves as a reward cue for us. And when we respond, we get a little piece of news that makes us want more. We seek this buzz to our physical detriment.

Over time, this poor posture, or text neck, can lead to early wear and tear on our spines and eventually cause degeneration and arthritis regardless of age. Still, pain doesn’t seem to register when we’re getting the dopamine hit of being “plugged in” to this random reward system.

Imagine if we keep up this bad habit what will happen to our posture, to our spines. I’ve been told, “The neck should have a natural reverse C- shaped curve, but patients with text neck are beginning to lose their neck’s natural curve. Instead, the vertebrae in their neck are stacked on top of one another.”

These exercises can help…

Without the natural curve in our spines, the joints in our neck begin to degenerate. The discs (or soft jelly-like tissue) between our vertebra eventually give out because of the pressure. This is the beginning of arthritis. With little room for nerves to exit, they become pinched and irritated. This can cause severe neck pain, stiff neck, shoulder pain, and headaches.

Do you have a phone that lets you text, surf the web, and play games? That’s a lot of mileage for your thumbs. Chiropractors have begun reporting cases of arthritis at the base of the thumb in younger people, possibly related to texting.

When your thumbs begin to ache, give the texting a rest. If pain continues, use your phone to make an actual call to your favorite health professional.

The good news? We’ve only been using smartphones since the 21st century, it’s not too late to break these dangerous patterns. There are ways we can catch ourselves in the act of this addictive habit and switch gears. Cultivating mindfulness and choosing contrary action gives us its own neurochemical reward. We feel more confident that we are choosing what is ultimately a kinder relationship with our bodies and less rude interacting with others. 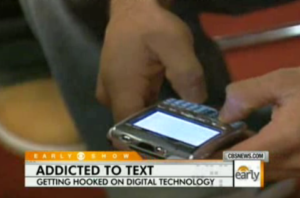 Are you addicted? Listen to this CBS interview.

It doesn’t hurt to experiment with new behavior. Try leaving your phone at the door when you enter your dwelling. Or if going out, try leaving it in the car. Our concentration improves as a result. When we spend time with people, we may feel jittery at first but this new practice can give us the capacity to be present, listen better, and connect in more satisfying ways. But, like all habits, practice makes perfect (or good enough).